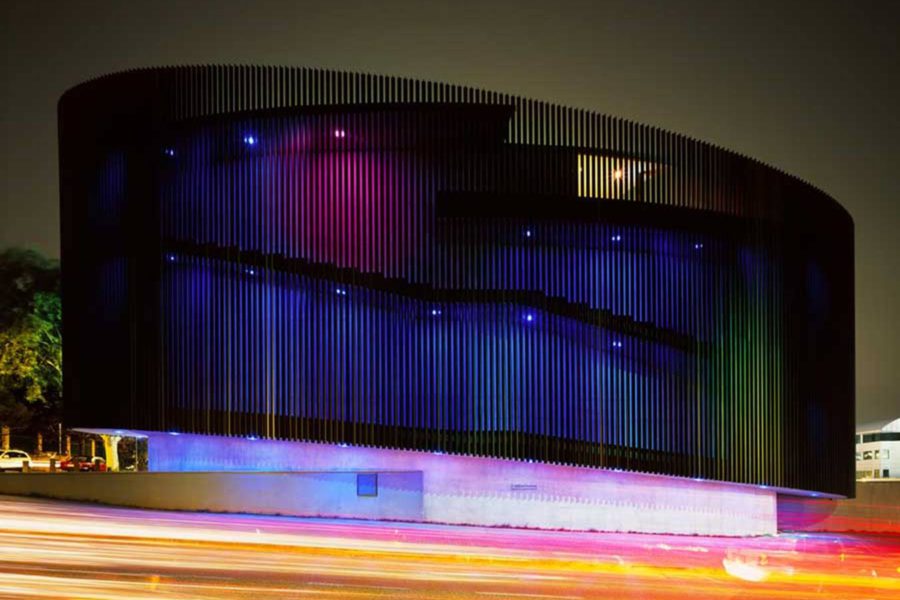 Review of Circa Gallery
Mail & Guardian Nov 2009, by Sarah Calburn

What a relief! Finally, in this fettered city, an unfenced building has arisen. Chains of fortification cast off, the new Circa Gallery by Pierre Swanepoel of StudioMAS architects hovers bold and beautiful over the corner of Jan Smuts and Jellicoe Avenues in Parktown North. A free-floating elliptical mirage in dynamic shimmering equilibrium, this building unreservedly calls architecture into dialogue with sculpture. More than that, the new wing of the Everard Read Gallery portends a new urban consciousness.

The Read was always gracious, serene. Now the qualities of its core have been released, a gift to the urban domain. The Gallery has opened its previously sealed south-western edges and sculpture has been let loose onto the pavement. Across Keyes Avenue stands the Reads’ most ambitious piece of externalised work: the Circa Gallery. It’s a hovering egg, an infinitesimally colour-graded aluminium slatted ellipse floating over a recessed concrete podium that deftly negotiates the fall to Jan Smuts Avenue.

Branded into its concrete base are the names of its architect and builder. This simple act acknowledges architecture as art form: as maker and carrier of formal, mental and physical interactivity. It also signifies Mark and Christine Read’s passionate intent to create an experimental building the program of which is (im)precisely defined to forge new relationships, suggest new adjacencies, to operate in the free-floating realm of “circa”. This building is aimed at the making of collaborative space between dealers and dealers, between artists, consumers and connoisseurs, between dream and reality, history and science, between us and the world.

To get into Circa, we move off Keyes under the low wide curve of the suspended ellipse. Through a seamless glass security screen, we’re pressed into a little courtyard, hard up against the back of the tall Caltex building. Compressed below the hovering egg, we’re made aware of size: we’re a bit too big, we’re caught in looming scale and tiny detail. Senses in slight disarray, we’re forced to see the intricate pattern in the landscaped surface, the close-range detail of the rectangular glass walls that break the oval concrete core to our right.

We’re not quite sure where we’re going, but the curving egg pulls us on, the space keeps widening. A little gallery opens up to our right, a slightly sunken concrete bunker tucked under the body of the egg. This is the Speke Gallery, a space currently full of large panels by Karel Nel, a joint venture between Mark Read and Mark Valentine of Amatuli (with James Green) dedicated to showing globally sourced cultural artefacts. We squeeze our bodies from space to space, wonder at this tight division, and find out later that these walls can be pulled up, entirely, into the space above.

Further on we arrive at a reception desk as the egg curves tightly away to our right. We are standing on a stage, a platform looking west over a pond, high above the noise of Jan Smuts. A huge piece of meteorite, solidly black and alive with words, lies at our feet. The water is silent. To the left, an absurd fire escape caught in a silver cage falls to earth. Eduardo Villa has never looked so good. We begin another journey.

Gravity reversed, we are impelled up the ramp. Stroboscopic aluminium blades form our outer casing as we ascend the elliptical path with no end in sight. Glimpses of the city form and unform. Light and rain splay through the palings.

Again the tight curve: boom — we’re in a room. It is huge, ovoid, concrete, made for ancient objects, for unlikely gatherings, for art, music, ritual – a room built to the tune of geological time. Even the enormous curved doors have a speed, a deafening slowness to their swing. Future histories glimmer in the light reflected off a submerged mirror; a standing wave pattern develops from the light cast through the door.

Up the egg again past the palings, around the last bend. This time the awakening is slow and wondrous. The roof carves away overhead, the palings swoop down in a long lazy curve, we’re on the roof deck of the world… Northcliff’s a sleepy Lion’s Head cradled in the view. Our familiar is made so strange it’s exhilarating. I want to come here for drinks every evening. Pity that this top floor isn’t a wine bar. This is the by-invitation-only Darwin Room, the Reads’ private think-space.

Which they deserve, for commissioning and championing an astoundingly affective piece of experimental architecture. A building that engages both intellect and bodily senses, Circa winds you up, and it winds you down again in equally effective reverse. Descending, you notice details both hidden and overt as they are variously employed either to counterpoint or to heighten the seamlessness of the difficult ellipse. At this level, Swanepoel’s signature blend of architectural elegance, formal manipulation, attention to surfaces and smooth masculine engineering is clear.

Later, driving down Jan Smuts in an evening traffic-jam, relegated to “normal” car-bound citizenship again, you will re-experience the magic of Circa. It transmits a rare pleasure in this conspicuously phobic city of ours: a shared experience of the urban landscape.

Johannesburg functions within a culture of simultaneous display and concealment. Booming bling operates behind the blind walls of shopping malls, brands compete on the neutral ground of giant billboards, spaces of struggle and pleasure (and wealth) have always required concealment. As a result, navigation of this city requires an exaggerated insider knowledge. Maps don’t show the closed-off roads, and urban landmarks are few and far between. Public urban space has been relegated to traffic island, pavement, parking lot; the city is configured to security and the drive-by.

The Circa Gallery makes a playground of this culture. Aluminium “fence” drawn into itself, it is both bound and unbound. Surface and depth are cast into oscillating relationship. The building is a landmark that can be accessed by foot or drive-by. Its ethos has ricocheted backwards, acting to break the walls of Everard Read.

And it plays havoc with Joburg’s town-planning regulations. “Circulation” is not considered “bulk”, so the outer elliptical ramp and stair (so crucial to the architectural experience) occupy territory under the radar. The monolithic, landscape-like scale of this building has been achieved on this tightest of corner sites largely through the manipulation of a loophole.

This building oversteps its boundaries. It is a rare work: a product of passion, commitment and — in all senses — manipulation of the givens. It is a building whose cues Johannesburg ignores at its peril.

Sarah Calburn is an architect in private practice. She sits on the board of the Gauteng Institute for Architecture and is currently running a series of design workshops for professionals called RAPID THOUGHT TRANSPORT: Architects re-imagine Joburg.

Back to War & Peace
Review of the Red House