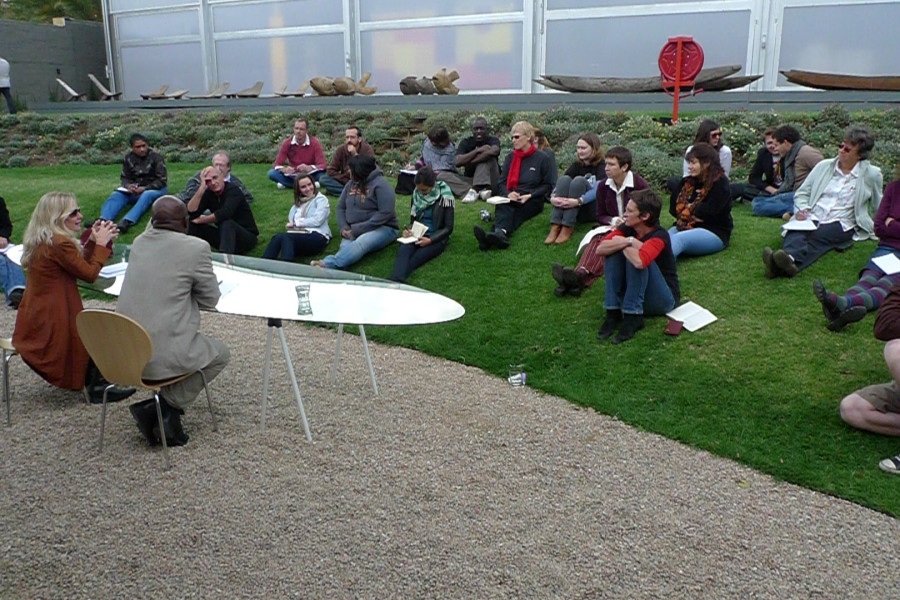 Anthropologist Cliffird Geertz remarked that at the highest level, activities like literature or nuclear physics are carried out by worldwide communities no larger than the population of a village.

Eliminate these tightly bound, self aware enclaves and you are left only with reliquaries, camp followers, school curriculi and other death masks of the definitive practitioners.

Architecture is precisely such a Geertziasn community, densely woven from mutual recognition of peers ,bound by an overwhelming canon and the nonnegotiable requirement for talent, virtuosity, topicality and ease in dealing with an extraordinarily wide range of matters.

Unfortunately architecture has used none of its centuries-old fabric of skill, mutually primed intuition, internal norms and inventive agility to represent itself to the world. It suffers the greatest possible indignity- that of having others speak on its behalf: leisure magazines, academics, legislators, decorators, economists, gadget makers, sociologists, fashionistas, engineers, software special effects merchants, cyberpunk dystopians technicians, do-gooders, book designers, english princes – are amongst the default voices , the ventriloquist dummies, through which the primary public art makes its case to its public.

Perhaps the two percent of buildings entrusted to architects worldwide ( amongst the ninety eight percent living free off their past discoveries) have become tombs of the unknown architect- with architects accordingly silent too, imagining themselves to be as evident and self explanatory as their mute buildings.

The obvious exception- the so called starchitects , simply prove the case; The marketer-fuelled monotone of Gehry, the Marlene Dietrich affectation of Hadid and Koolhaas David Bowie-style reincarnations-through-eclecticism are all stark examples of the impossibility of architects speaking about architecture as architects.

This silence has inevitably pushed architecture to the fringes of public debate: modernisation, development, urbanisation ,planning, the public good- in fact its entire primary reality- the civic realm- have become off limits to their inventor. .

Interestingly no shortage of candidates have sprung up to interpret architectures silence ; from cultural studies to spatial geography, gender analysis to politics of everyday life, new kinds of academic fiction apostrophsisng the city , learned hypostatisations of space ,and minute historical searches have interposed themselves in the bursts of noise and silence called buildings.

Sarah Calburn has stepped into the eye of this strange , quiet storm, correctly identifying the cause of the disaster- architects not speaking for themselves.
Not given to waste time on forensic niceties, Calburn has begun putting architects on the spot- centre stage in an art gallery- flanked only by the props of their own hastily conceived drawings. Like bashful candidates on a stand up comedy forum, Calburns masterclass participants have to complete the crucial step in her Rapid Thought Transit alone – they have to talk about architecture to the public.

This was no PR exercise, with boosterists advertorilaising the stolid commercial buildings of others- this was something between a séance and a beat poetry reading , with six architects and a few student participant–observers having to make impromptu responses to Johannesburg’s highways and. crucially, to invent their own way of talking about what they themselves have done, hoped, wished , imagined.-and missed.

The result was an oddly moving spectacle of people unchained from themselves by Calburns zen like provocation, by the shared perspectives of the nimble, polymathic Achille Mbembe and Sarah Nuttall and by the inescapable Socratic Mashups of the extraterritorial Rodney Place.

The presentation, to a crowded, highly diverse audience was dream like, with condensed, displaced and mimicking remnants of the two week projects accompanied by the progressively bolder voices of the architects speaking in their own name: humbly, tentatively, experimentally- but speaking- elaborately freed for a while from the scandal of having others endless advocating something in their name.
This was the evening on which Harpo Marx sang, Moses stopped stammering and Casper the friendly ghost solidified and stopped haunting the walls.

This is not the forum to comment on the work, save to say that it was uniformly fascinating but nonetheless quite overwhelmed by the rarest event of all, architects talking to citizens.

Sarah Calburn has put her finger on the artery from which architecture is bleeding into its own tissue, fading away with no apparent wound. She has blurted out the secret: that the makers of human reality must also be the immediate advocates of its futures. held to account in the spotlight of civic life as themselves, free to fail openly and free to succeed well beyond their silent hopes.